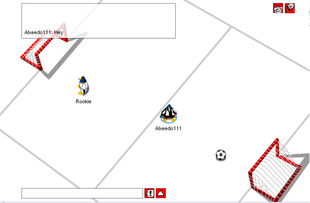 developed by Rocketsnail Games. Penguin Football Chat, having the

name Penguin Soccer Chat  in the United States of America. It was

published in 2001 having it being developed by Contact Music. When

you have logged in, your penguin would be dressed up as a soccer

player. Moving on to Club Penguin, it is designed for children ages

6-14 but all ages are able to play. Having to be started Club Penguin

threw a beta party. Penguins were allowed to gather pink and yellow

striped party hats. If you had one right now, you are to be considered

a rare penguin, Club Penguin is also avaliable in Mac and the iPad.

Elite Penguin Force which came out in 2008, and "Club Penguin Elite

Penguin Force: Herbert's Revenge!" Which was in stores in 2010. Club

Puffle Plushes. The Mix and Match Up Figures is a figure of a penguin

and you are able to take off the head, body, and feet and miz it up

with other mix and match figures. There is also a card jitsu card game

are easy to read and are pick your path books. Every Club Penguin

merchandise has a coin code that can unlock items with treasure

books, along side books can be unlocked with questions. You are able

to get a club penguin book and same coins for your online penguin.