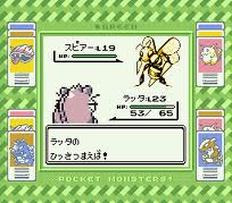 You might have thought Pokemon started with the TCG (Trading Card Game).

If you did,your surprisingly wrong! It was really "Pocket Monsters" the gameboy

Later on, the Pokemon Company had a anime series. With the first episode

aired, "Pokemon!, I choose You!" Was a major success! But Ash was originally

supposed to have A Clefairy as a partner Pokemon!


In February, Pokemon Green was aired in Japan, never really being aired in

America, In November, Pokemon Red and Blue was in stores later on.

During somewhere in 1999, Pokemon TCG (Trading Card Game) came out!

Pokemon made fortunes, while Pokemon lovers collected as many cards as they

Later on in June, the first Pokemon soundtrack came out. On the Billboard

Top, it was #92 the first few weeks. That was pretty good for their first time.

In November of 1999, Pokemon The First Movie came to theaters! Critics has

there bad reviews set, but PokeFans loved the movie. It got over $52 million!

Burger King's Promotion for Pokemon got its victory.

During October, Pokemon Gold and Silver was released. Causing the new

Pokemon anime series "The Johto Journeys" to happen. It featured over 100

In the games, Pokemon could be caught in what is known as a "Pokeball". If

caught,the Pokemon would be the under ownership of the person who caught it.

A starter pokemon is a choice of 3 Pokemon.Except in Pokemon Yellow,

similar to the first season of Pokemon, gives only a choice of a Pikachu. Your

rival chooses a Eevee. Your rival is considered to evolve his/her's Eevee to a

Jolteon, Vaporeon, or a Flareon. He/she picks the choice depending on if your

player loses or wins against the rival.

The pokedex is a electronic device that identifies every Pokemon. Every

trainer tries to complete the Pokedex, but its quite hard, and easy... in a way.